Skip to content
No Widgets found in the Sidebar 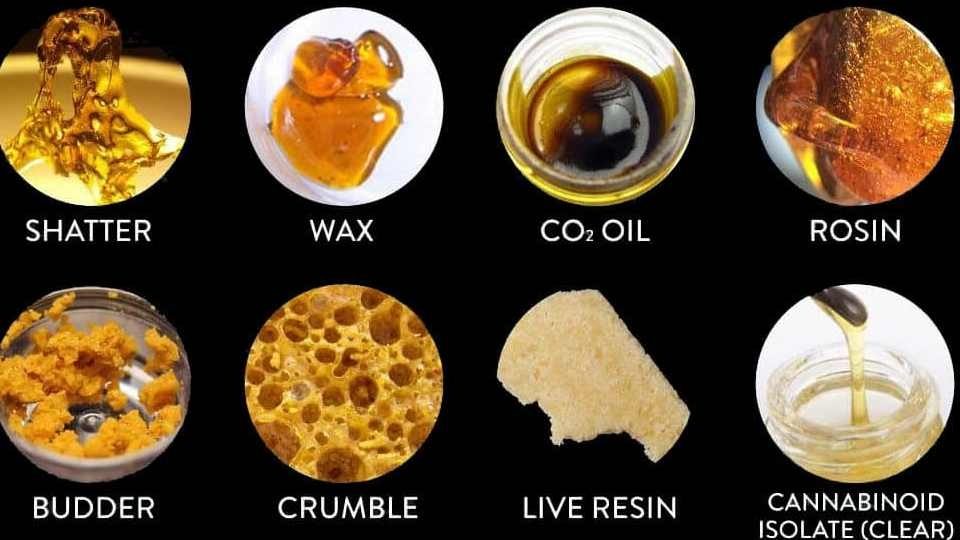 What are cannabis concentrates? Concentrated cannabis is a type of cannabis that has been concentrated to increase its potency. This can be done through various methods, such as using solvents or mechanical means. The resulting product is often more potent than traditional cannabis, making it more popular among those who use it for medical or recreational purposes. These concentrated forms of marijuana can have higher THC levels than regular marijuana, which can make them more potent and potentially more dangerous.

Cannabis concentrates can be very dangerous if they’re not used properly. Because they have high THC levels, concentrated forms of marijuana can easily lead to overdose and can be especially harmful to young people.

Cannabis concentrates come in many forms, the most common of which are listed below.

Budder/Wax: Budder and wax are similar consistency-wise, though they differ in color and texture. Budder is yellow to orange in color and has a waxy, creamy consistency. Wax, on the other hand, is usually amber or dark brown and has a crumbly texture.

Shatter: Shatter is a type of concentrate that has a hard, glass-like consistency. It is usually yellow or amber and is made by “pulling” the THC-rich trichomes (resin glands) from the plant material.

Oil: Cannabis oil is any concentrated extract made from cannabis plants. Oils are found in tinctures, capsules, edibles, vape cartridges, and topical creams. Cannabis oils can be either extracted with solvents (usually butane or CO2) or pulled from the plant material using only heat and pressure (the “rosin technique”).

Resin: Resin is a dark, sticky concentrate made by collecting the THC-rich trichomes from the cannabis plant. It can be either smoked or used to make edibles, tinctures, and other cannabis products.

Hash: Hash is a concentrated form of cannabis made by compressing the plant’s trichomes into a solid mass. It can be either smoked or used to make edibles, tinctures, and other cannabis products.

How Are Concentrates Used?

Dabbing: Dabbing is a way of consuming concentrated cannabis that has become increasingly popular in recent years. Dabbing involves using a “dab rig” (a water pipe with a special attachment for concentrates) or a vaporizer specifically designed for concentrated oils.
Smoking: Concentrates can also be smoked using a pipe or bong. To do this, you’ll need to add the concentrate to the bowl of the pipe or bong and then light it. Inhale the vapor through the mouthpiece.
Eating: Concentrates can also be added to food and eaten. However, it’s important to note that concentrated forms of cannabis can take longer to kick in when eaten. Start with a low dose and increase gradually as needed.

Effects of Concentrates on the Brain

Cannabis concentrates can have different effects on the brain, depending on the person and the amount used. Some people may feel:

Short-term effects of concentrated cannabis can also include:

Overdose: Because concentrated forms of marijuana have higher THC levels, they can more easily lead to overdose. Cannabis overdoses are rare, but they can be serious and even life-threatening. Symptoms of a cannabis overdose include anxiety, panic attacks, paranoia, and psychotic episodes.
Adverse effects on mental health: Cannabis concentrates can worsen anxiety, depression, and other mental health conditions. If you have a history of mental illness, you should be especially careful about using cannabis concentrates.
Dependence and addiction: People who use cannabis concentrates are at risk of developing dependence and addiction. If you or someone you know is struggling with addiction, there are resources available to help.

What Should I Do if I’m Using Cannabis Concentrates?

If you choose to use cannabis concentrates, there are some things you can do to reduce your risks:

If you or someone you know is struggling with addiction, there are resources available to help. You can find more information at the National Institute on Drug Abuse website.